Around the World When You Were My Age 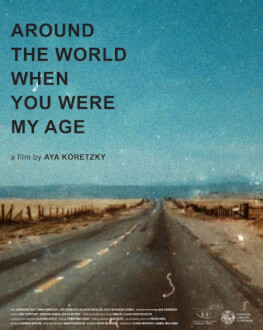 Around the World When You Were My Age

In the ‘70s, director Aya Koretzky’s father embarked on a trip ‘around the world,' from his native Japan all the way through Europe, North Africa and the United States. Through the years, the hundreds of photos and impressions jotted-down in his diary have been kept as mementos of this journey of self-discovery, undertaken at a time when he was still looking for his place in the world — both geographically, and existentially. Most likely a product of the filmmaker’s desire to better understand her origins — for, during his travels, the protagonist had fallen in love with Portugal, where he eventually decided to settle down and start a family — Koretzky’s film-journal renders not only the tenderness of her father’s youthful contemplations and his artistic sensibility, expressed in the slivers of reality captured in his photos, but also the particular emotions he attributes to each and every moment. Through an elaborate and imaginative narrative and audiovisual construction, the filmmakers pays a lovely homage to a father who, despite not having written a line about grand history, has given his daughter one of the most precious gifts possible, that of exploring the world through the joyful lens of an eternal first encounter between lovers. (by Andrei Rus)